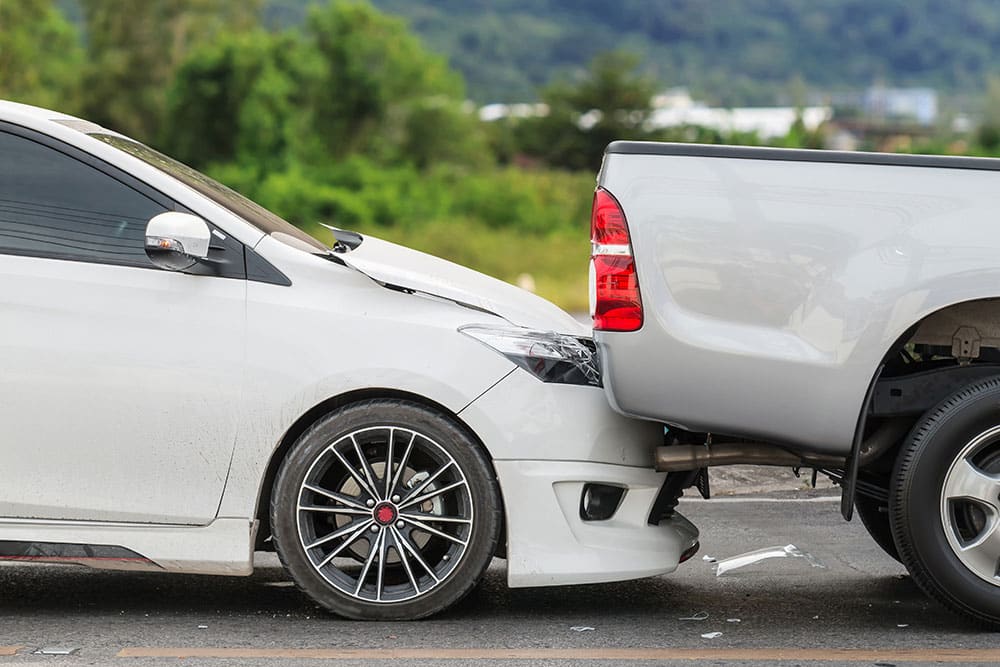 A rear-end accident occurs when the front of one vehicle crashes into the back of another vehicle. These are the most common types of car accidents in Colorado.

Who is at Fault in a Rear-End Accident?

The short answer is the rear driver is presumed negligent because Colorado law requires drivers to follow at a safe distance to be prepared if the vehicle in front suddenly stops to avoid an accident or pedestrian. The mere fact an accident occurred, however, does not raise a presumption of negligence. The presumption can be overcome based on the facts and circumstances of the crash.

In some cases, it is not difficult to apply the presumption. When a driver is rear-ended while stopped a traffic signal, the rear vehicle is likely going to be considered at fault. In these situations, the rear driver would probably receive a citation for a traffic violation related to the accident, adding to the presumption. For example, the driver may have been cited for speeding, following too closely, distracted driving, careless, or in extreme situations, reckless driving. Police officers and accident reconstructionists can measure skid marks on the road to determine whether a driver was traveling too fast to stop ion time.

In other cases, the rear driver may be able to present evidence to rebut the presumption of negligence. Some examples include the front vehicle suddenly changing lanes for no apparent reason and without signaling. However, a sudden stop at an intersection might not be unexpected because all drivers should expect a pedestrian, emergency vehicle, or vehicle running a red light might be approaching. Alternatively, it is not unimaginable for a crash to occur because the front vehicle’s brake lights were not operating. In these cases, the jury or the insurance company might rightfully apportion fault. Finally, mechanical failure in the rear vehicle could remove or lessen liability.

In one case, we represented the driver of a vehicle who was traveling eastbound in the fast lane along I-70 outside of Glenwood Springs. Another driver entered the expressway and sped past our client at a high rate of speed, cut him off, and slammed on his brakes to initiate a U-Turn at a location clearly designated for emergency vehicles only. The crash was horrific, resulting in our client being extracted from his vehicle and transported by helicopter to Denver for immediate surgery. The insurance carrier for the driver of the other vehicle attempted to attribute fault to our client. In that case, we were able to rebut the presumption of negligence.

Who is at Fault in a Rear-End Accident with Multiple Cars?

Another situation is where there are multiple vehicles involved in a series of impacts. It could be that one vehicle strikes the vehicle in front, pushing that vehicle into the victim. Both drivers might bear some blame for the victim. When there are multiple vehicles involved in a crash, it is important to obtain all insurance information. One problem in Colorado auto accidents is that drivers are often not carrying sufficient insurance coverage (on a side note, this is why it is important to add uninsured motorist coverage and medical payments coverage). This is why it is so important to drill down exactly how the accident occurred.

Determining negligence is critical following a rear-end accident. In most cases, this determination is pretty straightforward. Colorado law requires drivers to be careful while operating a vehicle. In determining whether a driver was sufficiently careful, the law compares conduct with the conduct expected of a reasonable person. The law asks how a reasonable, prudent person would have behaved in similar circumstances. If the driver’s behavior falls short of this standard, the driver violated the duty of reasonable care.

Drivers have a duty to be alert and to maintain a careful lookout for other vehicles, pedestrians, cyclists, and road hazards. Drivers should see the things that ordinary, prudent people would see. A failure to keep a proper lookout by, for example, colliding into another motor vehicle, thereby causing a motor vehicle collision, constitutes negligence.  While the driver in the rear is presumed to be negligent, and therefore liable for the damages caused, this presumption can be rebutted by evidence showing the driver in front was instead negligent.