Home > News & Resources > How to Interact With Police 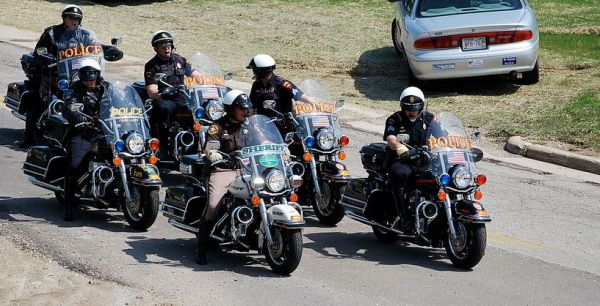 Cyclists throughout Colorado are expected to follow the same traffic laws that apply to motorists. As bike safety has become such a colossal issue in Denver, the police department has focused on enforcing the laws equally against motorists and cyclists. Unfortunately, many cyclists do not know the first thing about dealing with traffic citations, as some do not even own a motor vehicle. In an effort to streamline any legal problems, the Denver bike accident attorneys would like to discuss how to interact with police.

As an introduction, you should never ignore an officer when ordered to stop.  It does not matter if you were aware you violating a law. When you are confronted by an officer and asked anything, remember not to incriminate yourself. If the ticket goes to trial, the officer will as to everything you said and did.  It is perfectly reasonable to answer “I do not know why you stopped me.”

The officer may indicate where he was positioned when you allegedly broke the law. This may be useful later in court. If you are able to demonstrate the officer was in a position without a clear view, there may be just enough doubt about whether the officer saw you do what you were accused of doing. Similarly, if the officer indicates uncertainty about the violation, this can be used against him during trial. In order to prove someone violated the law, an officer is required to be able to positively identify both a violation and the culprit. At the same time, you may be able to demonstrate exculpatory evidence. For example, if a traffic light is not working properly, you can contact the local government responsible for maintaining the traffic light and ask for copies of maintenance reports.

It may be possible to avoid this altogether by simply being polite to the police officer when stopped. Perhaps the officer is not planning on writing a ticket but simply wanted to talk. Alternatively, perhaps the officer planned on writing a ticket, but changed his mind when you were respectful. There is no reason to be rude. If it appears the officer is going to write a ticket, try asking for a warning instead. That being said, be careful because whatever you say may be used against you in court. Even if the officer writes a ticket, remain polite. Police write a lot of tickets.  You do not want to give the officer incentive to show up to court and testify.

The actions you take depend on a number of factors:

You should consider these questions when determining which route you want to go. You should also consider the effects a ticket has. If you plead guilty, you will likely be required to pay a fine. Guilty plea also may affect your insurance rights and maybe even your driving privileges. Moreover, you may be required to provide information relating to the ticket to your employer. All of these factors must be weighed in deciding how to proceed.

If you pay the ticket, it is equivalent to a guilty plea and conviction. If you fight the ticket, however, you will be required to enter a plea of not guilty and appear in court.  As discussed above, the trial will essentially boil down to police v. cyclist. If you can demonstrate the officer is wrong on the law or facts, you could win. If the ticket was the result of a traffic collision and you do not beat the ticket, you will likely not be compensated for your injuries. Accordingly, if compensation for injuries is in order, fighting one of these tickets is necessary.

As previously mentioned, a ticket does not equal guilty. Officers sometimes make mistakes. You should remember you are innocent until proven guilty. This mean the prosecution must prove a crime was committed. You do not have to prove your innocence. Your only job is to poke holes in the prosecution’s case. During the trial, the police officer will testify about the facts. You will be given the opportunity to question the officer, introduce evidence, and argue why the officer is wrong. After all evidence is presented, a judge will make a ruling.

Even when riding lawfully, there is no guarantee you will not be ticketed.  Everyone makes mistakes. The important thing to remember is to stay calm and handle the situation. If you were involved in a legal situation necessitating the help of an attorney, you should reach out to local counsel immediately.